Post Election update: and what it means for your finances | HK Wealth

Post Election update: and what it means for your finances

Just over seven weeks after Theresa May’s decision to surprise the nation and call a snap general election, the Prime Minister’s gamble to gain a stronger mandate in parliament before beginning the Brexit negotiations has backfired. The election has cost her the majority she inherited from David Cameron less than a year ago, and many are predicting it won’t be long before that cost rises to losing her job. 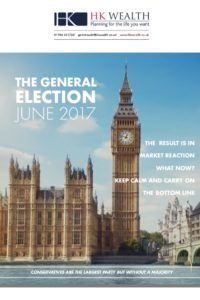 So, with a hung parliament once again, the Conservatives have gone into a ‘confidence and supply’ arrangement with the Democratic Unionist Party (DUP) rather than a formal coalition in an attempt to prop up her now weakened position. It’s a move which has troubled many thanks to the DUP’s socially conservative stance, which includes opposition to abortion rights and same-sex marriage, as well as their strong Euroscepticism. Perhaps most troublesome for many, however, is the lack of stability the result of the election has resulted in. The prospect of another general election within the next twelve months having already been strongly suggested – if it does happen, it’ll be the fourth time the British public will have been to the polls for a national vote in as many years.

But what does all this mean for your finances? There is still plenty of uncertainty about what the days, weeks and even months ahead might hold for the UK, but it’s possible to make some educated predictions based on what’s likely to happen. Brexit is of course still going ahead, now with less than two years left for the country to negotiate its exit terms. With many in Europe seeing Theresa May’s election result as damaging her credibility, it’s hard not to think that the Prime Minister’s negotiating position has already been weakened. As a result, a so-called ‘hard Brexit’ now looks less likely than before the election, with many in both business and government strongly favouring trade being prioritised over immigration control.

Sterling has held up relatively well after initially falling in response to the exit polls predicting the hung parliament result. The drop in the pound’s value remained relatively small as the markets reacted favourably to the Conservative/DUP alliance. In the longer term, the higher likelihood of a ‘soft Brexit’ is likely to strengthen the markets, but the current air of uncertainty which remains in Westminster could have a further negative impact on shares and investments. The events of the rest of June will likely determine how certain the future appears to be, with the Queen’s Speech to open parliament and the vote on the plans laid out within it taking place. If the Conservatives’ deal with the DUP allows things to go smoothly, this is likely to bring stability to the markets. If not, we could be in for a rocky financial period as the uncertainty continues.