In the middle of November, US President Joe Biden signed his $1.2tn (£894bn) infrastructure bill into law.

Biden has described the bill as a ‘once in a generation’ infrastructure measure. “America is moving again,” he said as he signed the bill, telling the American people that “your life is going to change for the better”.

To say that the bill has been controversial is an understatement. It required some Republicans to vote with the Democrats to get it through Congress, and caused a rift in Joe Biden’s own party that was partly blamed for last month’s election loss. 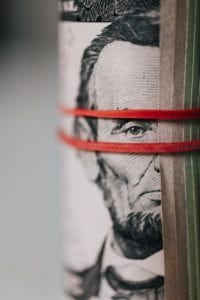 £894bn is a huge amount of money – to put it in some sort of perspective the market capitalisation (total value) of Marks and Spencer is around £4.6bn. The President is committing to spending the equivalent of 200 times the total value of M&S.

So what is he getting for the money? The main thing is investment in highways, roads and bridges, and money to modernise city transport systems and passenger rail networks, plus money for education and improving broadband speeds.

But dig a little deeper and there appears to be several ‘special interest’ projects receiving significant amounts of money, often – by a curious coincidence – in the constituencies of legislators whose support for the bill was crucial: the ‘pork barrel’ as it has long been termed in the US.

Critics of the bill have plenty of ammunition: one example is America’s ports which are currently struggling with backlogs. But, say the critics, rather than address the problem directly, the bill is simply giving the ports money to invest in green technologies – which may be fine in the long run, but which do little to address America’s immediate needs.

There is, though, a more widespread criticism. Inflation in the US has just reached 6.2% – the fastest rate of growth for three decades – and there are real worries that Biden’s infrastructure spending could throw more fuel on the inflationary fire, increasing the cost of living for most Americans.

The bill calls for spending on energy and material-intensive areas. These are exactly the areas where prices are currently rising rapidly – and with other countries copying Biden’s initiative as they look to recover from the pandemic an inflationary spiral may develop. Supply shortages would seem inevitable as the US Government spends more money to chase energy and materials that are already in short supply.

More importantly, the rising prices will not simply be confined to the US. All countries will be chasing the same supplies, from all over the world. With the oil price forecast to rise perhaps 50% by the middle of next year transport costs will rise significantly, which will inevitably be passed on to the consumer. And as we all know, Governments – whether in the US, the UK or elsewhere – never spend their own money: they only spend ours, in the shape of higher taxes.

Schedule a call or Send an enquiry
December 3, 2021
Previous post