It is interesting to look back 12 months to Rishi Sunak’s first Budget: it was followed by a year none of us could have predicted or imagined.

The Conservatives had won a comfortable majority in the December 2019 General Election. As expected, Sajid Javid became Chancellor and, in January, announced that the Budget would take place on Wednesday March 11th.

It was noted at one point last year that, ‘When Sajid Javid announced the date virtually no one had heard of Coronavirus. When he resigned in mid-February, it was something largely confined to China – there were just two cases in Italy.’

By the end of February, though, the potential economic impact of the virus was becoming clear, with all the world’s leading stock markets falling in the month. In March, the falls were to be even steeper – the FTSE 100 Index, for example, fell almost 14% from 6,581 at the end of February 2020 to 5,672 at the end of March. 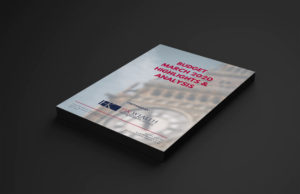 Sajid Javid resigned and was replaced by Rishi Sunak – then 39 years old and the MP for Richmond in North Yorkshire. It was at first thought that the Budget might need to be postponed, but Sunak apparently impressed officials with his grasp of the detail and the Budget went ahead as planned. It seemed a fair description at the time to say that Rishi Sunak could hardly have delivered his first Budget in more difficult circumstances.

Fast forward to the here and now and the UK in the midst of a pandemic. The UK’s vaccination programme has, so far, been a success, but the last year has done more damage to the economy than any of us could imagine.

In his speech the Chancellor had to lay the groundwork for an economic recovery – and find a way to pay for the huge increase in borrowing required to pay for the support measures that have been put into place over the last 12 months. This was set up to be a classic ‘Budget of balance’.

Perhaps this year the economic background to the Budget can be told anecdotally as much as it can be told analytically. We all know of businesses that have closed over the past year; of shops that will never reopen, and of people – especially those under 25 – who haven’t worked for six months.

As the BBC reported last week, the jobless rate rose to 5.1% in the three months to December with the number of people on company payrolls in January 2021 down 726,000 on pre-Covid levels – almost 60% of those are under 25.

Looking at the last year as a whole, the Office for Budget Responsibility (OBR) predicted that the budget deficit – the gap between what the government receives and what it spends – would be £394bn for the 20/21 financial year. A report in Wednesday morning’s Guardian said that official figures put the deficit at £271bn for the first ten months of the year – suggesting that the final figure is expected to be below November’s estimate.

The OBR is also suggesting that unemployment will continue to rise, with many jobs still cushioned by the furlough scheme (which, as we detail below, was extended to September 2021). The number of individuals furloughed at the end of January stood at 4.7m.

As many readers will know, the UK’s Gross Domestic Product (GDP) fell by 9.9% in 2020 – the worst performance for 300 years – and the economy remains under pressure as lockdown of some form continues. However, there are some grounds for optimism, with the economy doing better than expected in November as businesses learned to adapt, and it may be that the swift pace of the vaccine roll-out allows the OBR and the Chancellor to be more optimistic than they might previously have been.

In the recent past, the Budget has been presented against a rather fevered political backdrop, whether that was a Government with a wafer-thin majority, an election to win or a Brexit deal to negotiate – all with their consequent political intrigues.

This year, despite the obvious societal and economic tumult created by the pandemic, the political waters are actually rather calmer. Boris Johnson has recovered from his own brush with COVID-19, there are no leadership coups in the offing and the UK has finally left the European Union. The Prime Minister has promised a future independent inquiry into how the Government handled the pandemic but, for now, the court of public opinion appears to side with Boris Johnson and his team. With more and more people being vaccinated, the Government currently has an 8% lead in the latest Survation poll: the Conservatives are on 42% with Labour on 34%.

Not that this stopped the usual calls to ‘cut spending’ or ‘raise taxes’ in the run up to the Budget speech. A popular view amongst both Tory MPs and some in the opposition parties was that Sunak should do neither, and instead prioritise growth. In particular, he should leave the rate of Corporation Tax unchanged at 19%, giving the UK a competitive economy and – effectively – relying on a booming economy to pay the bill for COVID-19 and, ultimately, re-balance the Government books.

So it was that the Chancellor posed with his Treasury team and the traditional red box, and then set off for the Commons to deliver his speech.

The Chancellor rose to speak in a socially distanced House of Commons at 12:36, with the speech having already been hailed by Boris Johnson as a “roadmap for freedom” and a “Budget for recovery.”

The pandemic had, said the Chancellor, “fundamentally altered our way of life” and done “acute” damage to the economy as he noted the 700,000 jobs lost and the near 10% fall in GDP. Borrowing was the highest it had been “outside of wartime.”

The Chancellor started this section optimistically: “the forecasts show our plans are working,” he said, saying that the OBR now expected a “swifter and more sustained recovery” than they had forecast in November, with the economy returning to its pre-Covid level by the middle of 2022, six months earlier than had been forecast.

Unemployment had been forecast to peak at 11.9%: now the OBR was predicting 6.5% “meaning that 1.8m fewer people will be out of work.”

Whilst the Chancellor’s opening largely dealt with support for individuals and businesses, you always felt there was a ‘but’ coming…

The pandemic had presented, “huge challenges for the public finances,” the Chancellor said, with levels of borrowing only previously seen in the two World Wars. Borrowing this year would be a peacetime record of £355bn, falling to £234bn in 2021/22, higher than the worst year of the financial crisis. Borrowing will be 4.5% of GDP in the 2022/23 tax year.

The Chancellor declined to set any specific targets in the Budget, but rather set out three principles for what he saw as ‘sustainable public finances.’

First of all, he said, it was right that the state should help – but that in normal times the state should not borrow to meet everyday public spending. Secondly, he needed to be constantly aware of the level of debt and its affordability; thirdly, while it was right to take advantage of the current low interest rates, there was no guarantee that these would continue, or that there wouldn’t be a similar crisis in the future. Therefore, the debt needed to be dealt with now.

We’ve detailed the specific policies announced as part of the Chancellor’s approach in the appropriate sections of this document.

Rather than going through a long list of economic numbers, the Chancellor was into the main part of his speech within five minutes. As everyone had been expecting, he began by announcing the extension of the furlough scheme to September, along with other economic measures designed to combat the effects of the pandemic on individuals and households.

As expected, the Chancellor confirmed that he would not raise the rates of income tax, national insurance or VAT. But you knew there was a ‘but’ coming. Freezing allowances is often seen as a ‘stealth tax’, raising tax income without explicitly raising taxation levels.

The Chancellor acknowledged that not all changes to business taxation would be popular – but they were ‘honest’ he said – and preferable to finding savings from the public services. This was a “fiscally responsible, business-friendly government” and he wanted businesses to invest “right now” as he looked to unlock a potential £20bn of business investment through a series of measures.

A range of specific environmental measures were announced, including:

Rishi Sunak was always at pains to stress that he would be ‘open and honest’ in his Budget speech. He finished as he finished last year – paying tribute to the skill, generosity and determination of the British people and commending his Budget to the House. “We are at a moment of challenge and change,” he said. “This is a Budget that meets that moment.”

The Adam Smith Institute welcomed the headline-grabbing super deduction which, they said, would ‘induce investment into Britain’s factories and help the economy bounce back.’ However, they criticised what they saw as ‘the silliness of the mortgage guarantee.’

The combination of business rate reductions, investment incentives and other measures should help business and the economy rebound powerfully in the next few years. But there is a danger of a cliff edge later as support is withdrawn and taxes increased – or that business will anticipate higher taxes and fail to invest.

That may be it in a nutshell. The Chancellor can do so much but – as George Osborne always stressed – there are so many outside events he cannot control. Rishi Sunak has done what he can: he now needs the vaccine rollout to continue to be successful, the British people to spend as they have never spent before, China and the US not to have another trade war…

The list goes on. Eight months from now the Chancellor will be presenting his Autumn Statement to the House of Commons and, depending on the impact of the nation programme and the economic measures announced to date, we may see yet more measures designed to encourage investment and rebuild the public purse.