Bucket lists are, of course, very individual things. We will all have places that we want to travel to and things that we want to do which don’t necessarily chime with everyone else’s goals. However, bucket lists can also be surprisingly difficult to generate! The things that you really want to do one day might be completely different the next day. Remember being a child in a sweet shop? It’s a similar thing when you begin to consider all of the possibilities for one-off events, amazing travel or rewarding experiences.

To help you to think about what you want to do in later life then, here are nine suggestions from us that might inspire some additions to your bucket list. Time to get saving!

Complete a significant feat of learning
A lot of people, particularly in later life and middle age, miss the experience of formal learning that they may have had at school and university. With independent, at home or remote learning though, it’s still possible to achieve the same rewards available at more formal places of education. Perhaps you want to learn a language, a new practical skill or an instrument. The possibilities for expanding your knowledge still further in later life are varied and vast!

Do something ‘extreme’
One for the adventurers out there, many bucket lists feature something some of us would have to be bribed into… or at least strongly convinced! Whether you want to climb one of the world’s tallest peaks or throw yourself out of an aeroplane (parachute attached, of course!), considering something extreme can be a good way to break up every day life (for some of us)!

Set foot on every continent
There are lots of travel-based bucket list items and we are sure your bucket list will already have at least a couple on there. Consider this one, though, as a ‘starting point’ for a varied travelling life. Even if you’re well travelled already, have you missed out Asia or Africa? Beginning your retirement travels by making sure you’ve ticked off every continent can ensure that your wandering bucket list has variety.

Travel through an entire region or country
Another great way of gaining knowledge whilst on your travels, you may have a specific trip in mind that would work for this item, or you may need to look at some of the famous ‘great treks’. How about making it through every state in the USA? Or travelling through the Amazon? Or hopping around the Pacific islands? The possibilities for great trips (which take in some unknown places) are endless and hugely rewarding.

Complete a feat of physical endurance
Many people have some form of physical feat on their bucket list, be it a marathon, a long cycle ride, a mountain climb as mentioned above or a series of those events built into some sort of ‘ultra’-style endurance event. It doesn’t have to be that big to be significant to you though! If you’re not a regular wearer of running shoes then completing a 5K or 10K race can be just as rewarding. Don’t be put off by all of these ultra-fit marathoners!

Do something romantically mundane
Lots of people wish that their bucket list could feature just a few things that are a bit more personal to them. After all, thousands of people visit the Great Barrier Reef every year! Think about small things which you’d like to do which will always be personal to you in how they are achieved. Some popular list items in this section include sleeping out under the stars, building your own home, showering under a waterfall and sending a message in a bottle.

Complete a major sub list of your bucket list
A bucket list can seem more achievable if you break it down into smaller parts. If you’re interested in art then maybe a good sublist would be to attend every major gallery in the world. Seeing every UNESCO world heritage site is another popular entry. Perhaps you have a list of famous films or plays you’d like to see and experience. These smaller lists can also help your bigger list. Just think how many experiences you’ll have and places you’ll see when you complete the UNESCO list!

Create something
One for the ‘makers’ out there; many people want to create something themselves as part of their bucket list. What form this takes will depend on your individual skillset, or current learning path. Perhaps you want to build a kit car. Those good with words might want to write a book. Artists may want to sell a piece of their own work (now more than possible with the advent of websites such as Etsy.com and Notonthehighstreet.com). Like learning something new, this bucket list item can make for an incredibly rewarding and enriching later life. 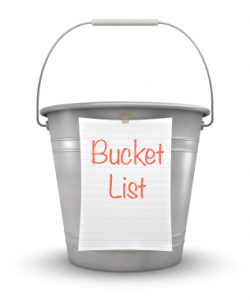 Time a bucket list event perfectly!
Arguably the Holy Grail of anyone who has thought properly about their bucket list, timing a bucket list event perfectly can be extremely rewarding and can help you to tick off more of your list in one go than you perhaps thought possible. For example, there are stories of bucket listers travelling to the World Cup in Brazil in 2014 and then going on to Peru to tick off Machu Pichu (and with it the South American continent). There are even some stories of travellers turning up in Rio for carnival in February and staying around South America until the tournament began in mid-June! Now that’s a truly epic bucket list trip!